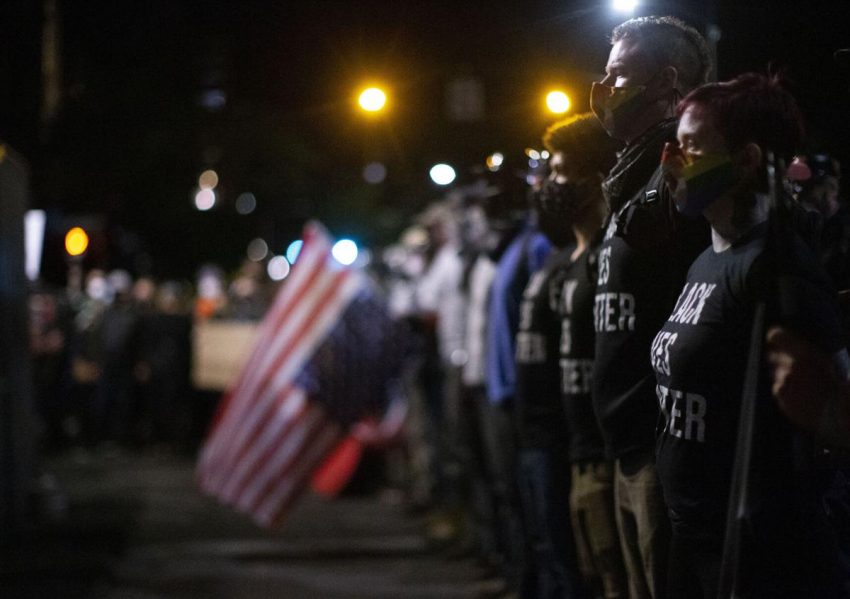 It is Saturday, August 1, 2020. In Portland, peaceful protests are being held at the Mark O. Hatfield Federal building. People are gathering in the streets in front of and around the building, continuing to demand the end of systemic racism and police abuse. Occasionally, someone throws a rock at the barricades surrounding the building. Someone lights a fire; others rush to put it out. The atmosphere is still tense but more festive than fearful. There is no tear gas in the air, which means that the roar of leaf blowers used by protesters to disperse the gas is gone. Protesters can finally hear each other, so they give speeches and rap songs. They mingle and dance, unafraid of being blinded by rubber bullets or beaten with truncheons. The federal police are gone.

Trump’s police aggressively attacked protesters, not just in front of the Hatfield building but throughout downtown Portland. Early morning as the rallies thinned, Trump’s police roamed the side streets, shoving protesters into vans and skirting them to buildings for interrogation. The federal police wore camouflage uniforms with no markings or identification. The transport vans had no identification. The interrogation buildings had no signage. And the protesters were not told what they being held for or if they were being charged for a crime. They were interrogated and released.

The emergence of Trump’s secret police coupled with footage of savage attacks on protesters caused a reaction. Nationally, Americans were appalled. Even conservatives – those not captured by the Trump cult – spoke up against Trump’s authoritarianism. Trump’s polling numbers dropped. In reaction, the president urged more repression, threatening to export his police to other cities, all governed by Democratic mayors. Federal police in Portland increased their violence. Again, the public reacted with condemnation.

Those in and around Portland acted on Trump’s provocation. Despite newsflashes of fighting and fire, everyday people from Eugene, Ashland, Salem, Olympia, Seattle, and Vancouver, WA, joined those in Portland to stand up for their right to dissent. The federal police responded with more violence. Trump threatened more chaos. A multi-racial, intergenerational, but mostly white middle-class bloc of women calling themselves the Wall of Moms joined the fight, placing themselves between the protesters and Trump’s police, not as a neutral party, but as allied protesters. The moms were joined by a Wall of Dads and then a Wall of Veterans. Trump’s troops attacked.

The seasoned protesters, the everyday people, and the wall of Walls refused to be intimidated by Trump’s goon squad. Every night, they’d gather with helmets, shields, leaf blowers, signs, but mostly themselves. On Monday, they were beaten. On Tuesday, they were tear gassed. On Wednesday, they were shot at. On Thursday, they were beaten some more. They were followed, threatened, surveilled, and pressured, but night after night they returned to fight, knowing that some federales with a nightstick was sure to beat them. They feared that the rubber in the cops’ bullets might turn lead. They knew that they were at risk of being snatched off the street by Trump’s secret police. And yet they kept returning.

After a couple weeks of seeing images of chaos on TV and social media, pundits and armchair activists started questioning what good the protests were doing. We were told that the protesters were “playing into Trump’s hands” by continuing to fight for their constitutional rights to assemble and petition their government. Some “free speech advocates” intensely concerned about “cancel culture” advised the protesters to stand down lest Trump exploit footage from the fight. The “sensible people” warned about Trump getting the upper hand, never acknowledging that what was at stake is not footage or even an election, but freedom. They treated the Portland battle as a public relations campaign, not a fight for our basic political rights.

There is a tendency for the press, even the left press, and activists to frame fights like Portland as a victory for the powers that be. The focus is almost always on the initial attack by the authorities, with the sick American tendency to blame the victim. When those being attacked fight back, too often the respectable crowd flinches and frames their reaction as proof that those fighting for freedom as in the wrong, tactically if not politically. When the protesters prevail, the left – including protesters – fail to embrace their success. They downplay their victory or stay silent. The crisis comes and goes, and whatever lessons are learned are lost to the unwillingness of anyone to acknowledge that everyday people fought back and won.

In Portland, Black Lives Matter activists and their allies gathered nightly in front of the Mark O. Hatfield Federal building for a couple months, refusing to leave. They showed up to fight systemic racism and police injustice. Some people engaged in minor acts of vandalism. Others rushed barricades. Things got intense and then calmed down. Seeing an opportunity to score political points, Trump sent in secret police to inflame the situation and “dominate the streets.” He succeeded in the former, but not the later. His goal to “dominate” was thwarted by a mass public uprising of everyday people who refused to sacrifice or mitigate their freedoms for the sake of “peace.” Things got very violent and frightening, but the people did not back down. They forced Trump to make a decision: Escalation or retreat.

On Thursday, after threatening to send in more cops, Trump backed down. The federal police presence was decreased. Quietly, Trump’s cops were being sent home. Friday night, the scene in front of the Hatfield building was tense but festive. The protesters showed up expecting a fight, but found themselves relatively alone. City and state police were still about, but without the militarized threat of Trump’s goons. Shouting and screaming turned to speeches about systemic racism and police overreach. A significant and important battles had been won.

Remember this moment, acknowledge its importance, and accept that the people won. Yes: We fucking won. Enjoy that feeling and use it as fuel to win some more.