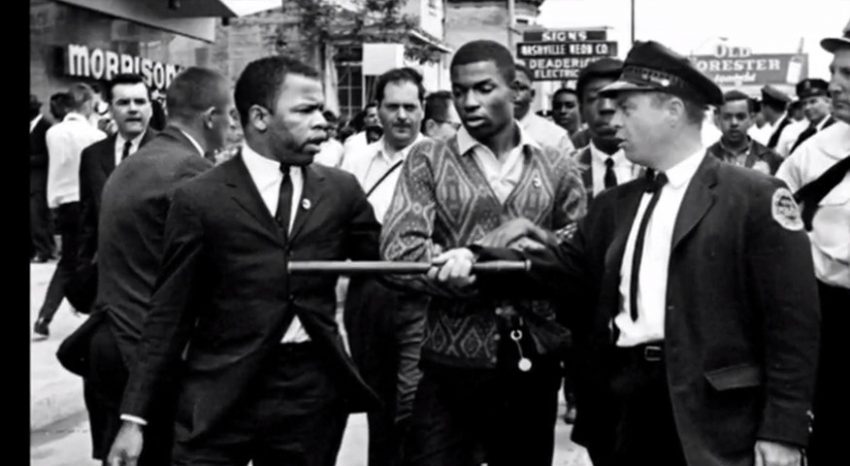 The United States has a long history of political repression. That does not minimize what is going down right now, especially what is happening in Portland. No, what I want to convey is that what we are seeing is not out of the historic norm. In fact, this is what happens when we rise up, assert our rights, and demand more. The violent authoritarian response is in reaction to what the powers-that-be (or at least some of them) see as a threat. If we were not a threat, they would not react.

Know that the reaction is not limited to violence and repression. It also takes the form of propaganda. Right now we are being told that protesters are “violent anarchists.” Spray painting and property destruction are being inflated by the authorities, their examples cherry-picked or even invented. Accusations are stated without context, explanation or reference. And, as usual, the press, even when it does good reporting, focuses on smoke and fire. It is only on “fringe” left wing websites that we see things from the protester’s perspective. It is only through research do we find that much of the mainstream news, intentional or not, is propaganda recycled from Homeland Security and the Trump administration.

We must be very careful when we talk about and share news stories on the protests. Not careful in that “They are watching us,” but careful in what we share. What is the source of information? Are you sharing fact, speculation, opinion or propaganda? If you are sharing facts, are you providing context? If you see a source, have you checked the source? Do you even know if the source of your information exists? Resist sharing single stories, single stories rarely provide context.

History teaches us that the radical environmental movement of the 1980s/90s was viciously attacked by the FBI. Organizers were set up. Earth First organizer Judy Bari had her car bombed. Central America Solidarity activists in the 1980s were harassed and intimidated by the FBI. Their offices and homes were broken into. They were spied upon.

The late 60s/early 70s saw COINTELPRO, a FBI program directed towards Black Power activists and socialists. Members of the Black Panther Party were targeted for assassination by police. Local police departments had “Red Squads,” dedicated to taking down activists on the left.

The Civil Rights Movement was attacked by the FBI, police departments, entire states, and private terrorist groups. Organizers were assassinated and jailed. The Klan, White Citizen Council and others fire bombed, raped and murdered people who fought for their rights. Right wing terrorism was wedded to official racism in a movement called Massive Resistance.

Prior to the Civil Rights Movement of the 1950s and 1960s, activists were met with lynching. While Blacks were the primary target, the right also lynched immigrants, especially those who were labor organizers or suspected of being “reds.”

The 1920s and 1930s saw one of the most viscous and violent periods of political repression. The Red Scare, particularly the Palmer Raids, targeted socialists, anarchists, labor organizers, civil rights activists, gays and lesbians, and immigrants. The FBI routinely rounded up immigrants suspected of leftist sympathies, folks whose only “crime” was to attend one labor meeting. These immigrants were herded onto boats and shipped back to Europe. Private police such as the Pinkertons and civic organizations like the Veterans of Foreign Wars waged their own violent campaigns on “reds,” some which resulted in massacres.

This is the history of our country.

What is also the history is that none of this repression deterred those who fought for better lives. The attacks did not stop advances from being made. The Red Scare ruined lives, but failed to stop labor activists from winning the 8-hour day, the weekend, and the end of child labor, not to mention better working conditions and the right to organize. The Palmer Raids didn’t succeed in shutting down growing socialist and anarchist movements, movements that pushed FDR into the New Deal.

Lynching and Massive Resistance did not stop the Civil Rights Movement, just as beatings and arrest did not stop John Lewis. Yes, many people died or were hurt in the struggle, but they persisted and secured the right to vote and to organize. The Black Power Movement was attacked with precision and damage was done, but activists did not give up. They dug in and moved forward, creating cultural and social change that serves as a bedrock to political change.

The Central American Solidarity movement fought through FBI repression and was able to stop US intervention in Central America, while illegally smuggling thousands of refugees into the US, to freedom and safety. Earth First! succeeded in changing environmental policy and raising awareness, even with the feds attack. The Anti-Globalization Movement and Occupy helped create the seeds of the multi-racial/cross-cultural/intersectional resistance we see today.

We are moving forward. Because we are in the thick of it, we might not see it, but our adversaries do. Again, they would not react like they do if they did not sense our strength. They react because they are afraid that we are feeling our power. They know that when we feel our power we can not be stopped. They know that we have the power to cripple white supremacy and neuter the patriarchy. That scares the shit out of them, for it is the source of their power and wealth.

So, our modest demands – to be treated equally and with respect, that we no longer live lives of insecurity and unnecessary struggle, that our democracy works as a democracy, that we take care of Earth as if it were our home, that no one starves, lives in fear, or goes without decent healthcare, that we enjoy clean air and water – are met with ultra-violence and repression.

We are asked to compromise and some of us start to consider without asking, “Where is the middle ground on a woman’s right to chose?” “Where is the point of compromise on police killing black and brown people with impunity?” “At what level is it acceptable to poison the water and air?” If you understand what Black Lives Matter or MeToo really mean, to compromise on those issues is to invite murder and rape. Where is the compromise?

Those who fear change because it threatens their narrow interests (but in no way attacks their quality of life) try to set us against each other. They point at “violence” while they shoot at us. They blame anarchists, Antifa, “Mexicans,” “cultural marxists,” “feminazis” and immigrants. They conflate racism and sexism with free speech to confuse us and get us to back off. They frame demands for accountability with “cancel culture” as if we are obligated to buy stuff from people who denigrate people of color, women, and LGBT people. The use every wedge that they can think of to divide us. This is a very very old game. Do not fall for it.

The question is not whether we will prevail or not, it is when will we prevail and how much damage will we endure in our fight for freedom, equality and justice. The cost of our struggle for life, liberty and the pursuit of happiness will be determined by our dedication to this fight and our unity. Dedication and unity is our armor. Hard work and smart decisions (especially on what we communicate) is our shield. We have our shit together, they will attack but their blows will be glancing and we will fight through.

Trust John Lewis’s words. Trust him when he says, “Do not get lost in a sea of despair. Be hopeful, be optimistic. Our struggle is not the struggle of a day, a week, a month, or a year, it is the struggle of a lifetime. Never, ever be afraid to make some noise and get in good trouble, necessary trouble. We will find a way to make a way out of no way.”