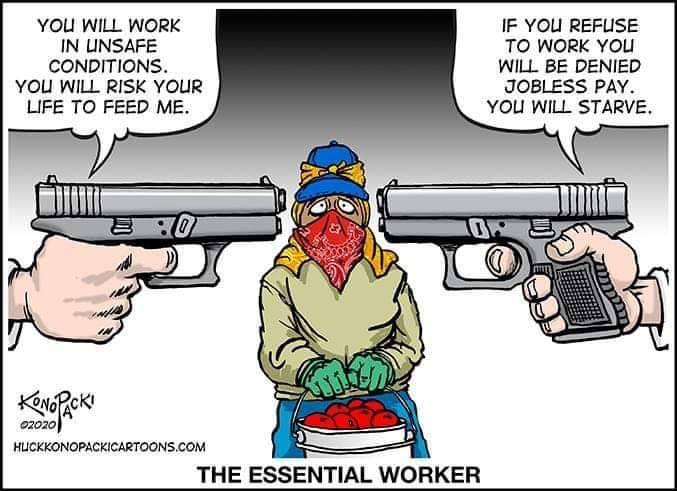 As a news-junkie and a journalist, I love stories that unfold, the ones that start with some basics and then explode. In the initial stories, there’s hints of something more. I don’t really know what that something is, but a close read reveals some unanswered questions and odd coincidences. Enterprising journalists take those hints and start digging. Often the dig is dry, but not always. Sometimes the dirt gets thick.

When the Bay Area went under lockdown in March, the state left Tesla off the list of essential businesses. Make senses: Tesla manufactures new cars. We have plenty of cars available – new and used. Demand for travel anywhere is low. There are plenty of idle rentals. There is no need to bring new cars into the world, no matter how special the father of a car company thinks he is.

Of course, Musk sees it differently. Since the beginning of the shutdown, he’s raged that Tesla is essential, said the shutdown is unfair and unconstitutional, called mitigation measures overkill, and has even edged into virus-denialism. He frames himself – Elon Musk visionary tech genius rebel – as victim. He’s a modern-day mutant fusion of Howard Roark and John Galt. He’s fighting climate change, he’s got a flame thrower, he’s going to the moon. Nobody appreciates him. No one claps loud enough for the Übermensch. Musk is better than us. He is a man above politics, economics and other humanly affairs. He cares not for coin or cars.  His objection to the closure of his plant is FREEDOM!

After a few months of complaining, Musk played bully with Fremont. He threatened to move his operations out of California unless he was allowed to reopen. He threatened to sue. Neither Fremont, Alameda, or California flinched. He got Trump to say that Tesla was an “essential business.” He “asked” his workers back to the plant and staged a reopening, telling the press that if anyone was to be arrested, it should be him (the one thing out of his mouth many of us agreed with). And it paid off.

He put the city, county and state in the position to react and they refused to call his bluff. Governor Gavin Newsom punted Musk’s bully tactics, saying that it was a county issue. Fremont’ mayor also deflected to the county. Rather than publicly confronting Musk, Alameda County quietly met with him and worked out an opening plan. We know Tesla’s version of the plan but not exactly what Musk and Alameda agreed to.

Justifying the opening, Musk leans hard on his safety plan and how it protects workers. He is says that any worker not comfortable returning to work in Fremont or his Nevada plants are free to stay home. They will still have a job and there will be no retaliation….kind of. The Verge dug deeper and learned,

[Tesla’s North American HR boss Valerie] Workman told Gigafactory employees that they are allowed to stay home on unpaid leave if they “do not feel comfortable coming into work,” just as the company told its factory workers in California. But because the furlough is ending, she explained that workers may no longer be eligible for unemployment benefits they were receiving during the shutdown.

So, the workers really have a no-choice choice: Go to work and get paid, stay home and starve…all because Musk bullied Tesla into being declared an “essential business.”

Musk says that this is all about Freedom and fighting “fascism,” but it isn’t. As Common Dreams discovered, Musk’s crusade is about money,

But why did reopening that plant matter so much to Musk? Why did he feel so compelled to directly challenge civil authority in the middle of a pandemic?

We don’t have to guess why. We just need to look at the historic—and widely celebrated—pay deal that Musk brokered with Tesla a bit over two years ago.

This March 2018 agreement lavishes upon Musk a series of stock option awards that will kick in over a decade-long span if Tesla’s “market capitalization”—the sum value of the company’s shares—hits a dozen ambitious predetermined targets. That market cap stood at nearly $59 billion when Musk signed his pay deal. To collect on the deal’s total enormous incentive jackpot — an estimated $55 billion—Musk would have to grow Tesla’s market cap by over ten-fold, to $650 billion.

If Musk pulls that off, one auto industry trade journal noted after the pay deal’s unveiling, the options Musk would pocket would likely make him “the richest man in the world by a massive margin.”

By the end of 2019, some serious leaping had begun, as Tesla registered its first quarterly profits. Then, three weeks into 2020, Musk reached his pay deal’s first incentive threshold when Tesla shares closed at over $569 a share. That price nudged the company’s total market value over $100 billion.

But Musk, under his pay deal’s terms, didn’t just have to hit that $100-billion market-cap target. He had to keep Tesla’s average market value above $100 billion over a six-month span. That didn’t seem to pose any problem—until the coronavirus hit and threatened to shut down Tesla’s Fremont plant.

The Tesla shares, in the end, didn’t tank. Musk’s all-out offensive against California public health officials, his enthusiastic willingness to subject Tesla workers to corona risk, stiffened the spine of Tesla investors. On May 4, Tesla shares closed at $761, a price high enough to bring the company’s 60-day average market capitalization over $100 billion. Reaching that milestone triggered the first batch of stock options in Musk’s pay deal.

The options gave Musk the right to buy Tesla shares at the company’s $350 January 2018 share price. He could hang on to the shares or turn around and sell them at the $761 May 4 closing price. Either way, Musk’s personal net worth would stand $700 million higher.

Musk now has eight more years to clear his pay deal’s next 11 “valuation hurdles.” If he clears them all, the value of his personal Tesla stock holdings could total over $200 billion.

And, that’s it. That’s the real story. Like Trump’s rush to open the country in order to save his re-election campaign, no matter the cost to everyday people, including the lives of his supporters, Elon Musk’s “principled stand” is about what everything Elon Musk is about: Money, money, and money.

Those of us in the Bay Area, who follow Musk and other billionaire tech pests, as informed citizens and not fanboys, are not surprised by this story. We know that under the “progressive” “hip” facade, Silicon Valley is a fetid mixture of Libertarianism, greed, and deceit. PR profile be damned, Musk is one of the most craven of these creatures, a slightly more “charming” Peter Thiel, but every bit as toxic. Now is a great time to unmask these people for who they are.