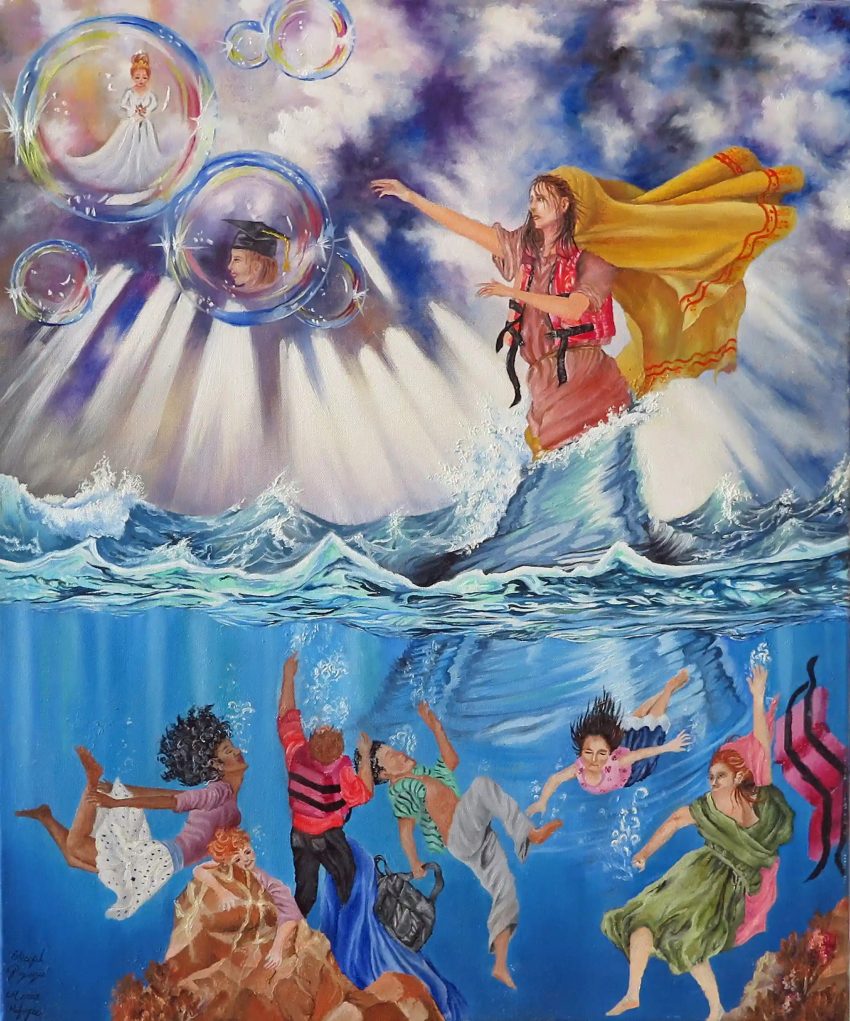 Let’s talk about refugees. Right now, we have a refugee crisis. There are thousands of people who, through no fault of their own, are desperate to get to the United States. They are trying to escape violence and oppression, much of which impacts women. Men are also in danger, fearful of retaliation, of being snatched up in the night and them and their families being slaughtered because they are thought to have worked for the “wrong side.”

The refugees I am referring to are from Central America – mainly Guatemala, El Salvador, Honduras, and now Nicaragua. They fear their own government, the police, cartels, and criminal gangs. They see their villages and neighborhoods destroyed by violence. They witness those who organize against violence (not one of the power players) be raped, tortured, killed or disappeared with no reaction from or protection by the authorities. They are robbed and forced to pay protection to gangs, when they are often the poorest people in their village. They fear that their children will be drafted into gangs and cartels, if they make it to 13, the prime age for targeting. And that’s the boys. Their daughters face rape, kidnapping, and trafficking.

When these folks make it to our southern border and are told to go home. The Biden Administration is taking heat on the crisis from all sides. Unfairly from the right, who contradict themselves by falsely claiming we now have “open borders” and a “people languishing at the border.” The left blame Biden for not being fast enough to reverse Trump’s immigration policy, a criticism that has merit if we ignore one important thing:

Donald Trump and Stephen Miller destroyed our immigration system, a system that wasn’t that great to begin with. They diverted spending to enforcement and round-ups, while starving and under-staffing programs dealing with processing migrants, especially refugees. Instead of creating more processing centers or hiring more immigration judges to deal with demand, they turned suburban warehouses into holding pens and put ICE and Border Patrol on a hiring spree. They also attempted to place stops or caps on who could come to the country, centering their bans on Muslims. In many cases, they were successful. And then there was The Wall.

When Biden became president, he inherited an immigration system that was “rebuilt” to punish and imprison people. He found himself with more money earmarked for a goddamn wall than dedicated to helping refugees. Worse, due to Trump’s refusal to cooperate with the transition of power, Biden and his team were denied months to hire the right people, gather information, and prepare to turn the system around. Senate Republicans – who, during the “transition,” still held power – refused to engage with Biden’s nominees.

On immigration and other things, Biden is at least six months behind where a president would be had he not had to deal with an immigrant-hating baby man who was intent of sabotaging his predecessor. Congress hasn’t dealt with immigration – instead focusing on the pandemic, the economy, and infrastructure, all things that must be attended to.

Here we are now, with the withdraw from Afghanistan and more demand by refugees to come to America, something that Biden is very much open to. Problem is that the same lack of resources and damage to the immigration system – specifically the areas dealing with refugees – that he inherited from Trump apply just as much to Afghanistan as they do to the border.

Further complicating things is that with Afghanistan, Biden has a very compressed time to deal with the crisis. He initially set the exit date at August 31, thinking that he’d have the resources to pull that off. Things did not go as planned so he extended the date, something which the Taliban rejected (though what that means is unknown). Whatever the date, the United States must act fast, and, while it has help from willing allies, it does not have a refugee processing system that can deal with this surge, and that is thanks to Donald J. Trump.

As I wrote earlier, even before Trump, the immigration system wasn’t good. The carceral side of immigration has long taken precedent over the compassionate side. The system favors high skilled workers imported to make the wealthy wealthier over refugees fleeing from violence and terror. Attempts during the Obama administration to turn the system towards compassion were staggered and slow and then Trump came along to stomp on compassion and champion cruelty.

The reason Obama’s (and now Biden’s) attempts to reform the immigration system were halting and why Trump’s success in destroying the system was successful comes down to how we do immigration reform. If we want significant change to the system, it is Congress, not the president, who must act. Only Congress has the power to overhaul the system. As important, it is responsible for funding the system at a level where the overhaul is effective and reforms stick.

The last time there was significant immigration reform was in 1986, when Congress passed and Ronald Reagan signed the Immigration Reform and Control Act (IRCA). The law was mostly punitive. It made it illegal to hire “illegal immigrants.” IRCA did allow undocumented immigrant ag workers – a sop to Big Agriculture – but only people who had been in the country since 1982.

If an “illegal immigrant” could prove that they were here since 1982, they could apply for citizenship providing that they paid a fine, pay whatever back taxes they owed, and admitted guilt. They also had to prove that they had no pre-existing criminal record. If they were rejected for any reason, that initial admission of guilt prevented them from applying for citizenship in the future. IRCA had nothing in it to deal with present or future immigration demand, nothing to deal with refuges, no “path to citizenship” for new migrants, nothing. It was mostly used as a tool to round up and deport “illegals.”

Since IRCA, Congress has tried and failed to pass major immigration reform. George W. Bush actually had a decent deal worked out with Mexico, one that would have been drafted into legislation and put before Congress, but the attacks of 9/11 happened and the deal fell apart. In 2005, both the Senate and the House passed separate immigration reform bills, but they failed to reconcile the legislation and both bills died. Obama had proposals but, other than a small group of moderates, Senate Republicans had no desire to tackle immigration, especially if that gave the First Black President a “win.”

Thus, for 35 years, our immigration system has been stagnant, the last reform limited to “solving” an immediate “problem” in a way that took us backwards, not forward. And, while the system has been stuck in pretty much the same position for more than three decades, the demands, nature and need of immigration have drastically changed. The system that poorly functioned back in 1986 is what we have to deal with in 2021.

Lacking immigration action in Congress, presidents must work with what they’ve got. While they can shift priorities and move some resources around, there isn’t much they can do to create something better or fix major problems. They can, however, destroy what is there by refusing to staff specific positions, keeping job openings vacant, starving departments of funding, and making rules that are so difficult and onerous that people can’t do their jobs – all of things done by Trump with the help of Stephen Miller.

So, not only does Biden have to deal with two refugee crises, he is forced to do so with two hands and one foot tied behind his back. He is so hamstrung by the limitations of the office and the destruction done by Trump, that even if the pullout was smooth, the U.S. would still be slow and halting in dealing with Afghan refugees, even those people who assisted the U.S. over the last 20 years.

Biden campaigned on reversing Trump’s immigration policies. Trump’s destructiveness, the pandemic, and lack of political pressure have made him slow to fulfill that promise. As someone who very much supports a very liberal immigration policy, his slowness on reform and addressing refugee situation at the southern border is more than disappointing; however, I also know what he is dealing with.

Afghanistan is a different challenge. Biden does not lack the compassion or desire to resettle Afghan refugees in the United States. As important, backed by public support and generally not giving two fucks about blowback in the political press, he has the will to follow through. The question is, does he have the resources? For that we turn our attention to Congress.

Is Congress, particularly the House, ready to support Afghan resettlement by reforming the system to make it easier to process refugees? Will they pony up the money to enable the president to act on their reforms (or to work with or around the system as it currently is)? Are Democrats up for reelection in 2022 willing to risk attack adds by Republicans accusing them of “endangering the homeland” by “allowing Ilhan Omar terrorists” into the country?

And, more important, will people like you and me pressure our Congress members to do the right thing? Will we stand up to the xenophobes and bigots and assert our vision of a compassionate America? These are the questions we must ask ourselves.