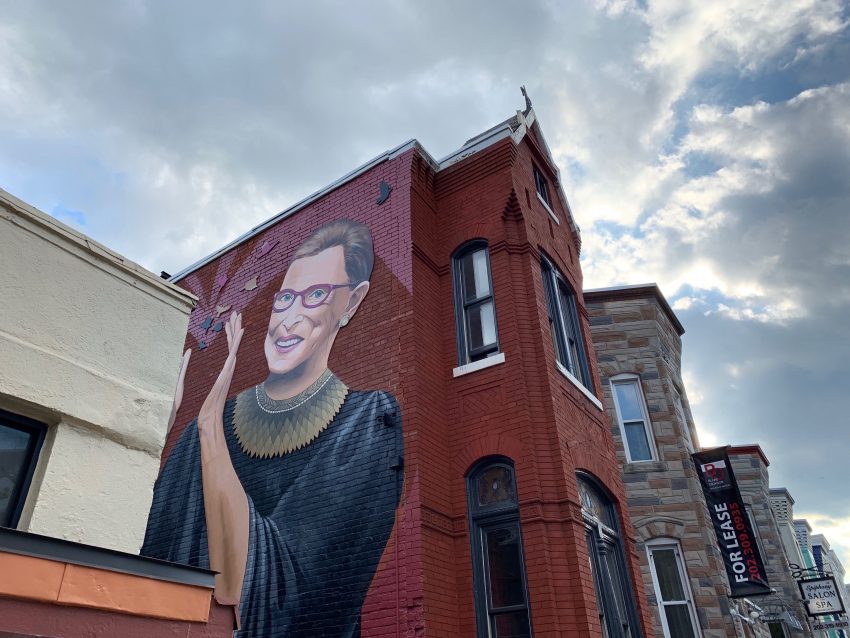 On Friday, around 5 p.m. Pacific time, my phone started buzzing. Every text said the same thing, “RBG died.” I turned to my friend Julian and told him. “Are you sure?” he asked. I went to my Washington Post app and the news covered the screen. I held the screen for Julian to see, “Yup.” His face dropped to match mine. After a moment, I straightened my shoulders and said, “Well, now we fight.”

Walking home, down Valencia, I felt, not sadness and despair, but anger and frustration. Looking into the void, I joined a spontaneous chorus of hundreds of thousands, “FUCK!” If anyone around me heard my exclamation, they knew what I was saying and why.

A young woman was walking beside me. Her eyes expressed mixed emotions of anger, sadness, concern, and fatigue. I wanted to say something, to connect with someone, not through an electronic device, but in some physically present way. Julian was blocks away walking home to the Excelsior, and we already said what we had to say. There was a guy walking a ten-thousand-dollar dog and another chattering away on his phone about the stock market.

For the tenth time, I looked at the Post headline, this time holding it up for the woman to see.  She said, “I know, I just heard myself.” We were silent. “Everyone knew she was going to die. It was just a matter of when,” I said, trying to tap into my practical mind.

“She stayed alive as long as she could.”

“Yeah, she squeezed every bit of life out of that body. But, damn, this year,” I had a hard time avoiding the cliché. “Well, another thing to fight for…or against.”

“I try not to pay attention. My mom is stuck inside and all she does is look at the internet and worry.”

“My job is politics, so I have to pay attention.”

“I’m sorry you have no escape.”

“No, it’s fine. I do things. I mean, I write on politics and do campaign research, so the politics…I do something with it.”

“There’s just so much, too much to pay attention to. You have to chose what you care about…”

“Yeah, there’s a lot. My work, I read a lot but it’s ummm mechanical. I filter stuff, I couldn’t do my job if I got lost in the information. It’s just a matter of discipline.”

We approached the corner bookstore. I turned to go in. She did as well, saying, “That’s funny. This is on my list of things to do.”

“Ha! I worked here. Dropping by to talk to the boss.”

I walked to the back to talk to Kate, the owner of the store. She was staring into a computer screen. I asked her if she heard the news. She hadn’t. I showed her the Post obituary. She sagged in her chair, straightened up, took a deep breath and said, “We have to win” or maybe I was just reading that in her expression, which went from exhaustion to resignation to determination in about ten seconds.

By the time I got home, my head was at

Stop for a moment and look at those words: What do we do next. Note the last words, for it is very important. Know that I could have asked myself, “What do we do now?” but instead of now I used next. There is a subtle difference between now and next in the context of this question.

When I ask “What do we do now?” I isolate what happened (Ruth Bader Ginsburg’s death) and, by doing so, elevate an important event to the important event. When we make Ginsburg’s death central to everything, her life takes on more meaning than it should. Rather than Ginsburg being an exceptional person among many other vitally impactful people, we make her, in this case, the most important agent of everything good and the sole defender against evil. “Now that she is gone,” we despair, “what will happen to us?”

That simple word – now – takes us out of the fight for something better. Now turns Ruth Bader Ginsburg into our “man on the white horse.” Alternatively, she is the child with its finger in the dike, the only person keeping evil from overwhelming us. We can abstract Ginsburg and look at her as a liberal vote on the Supreme Court, but as long as we ask, “What do we do now?” we diminish our own importance and undersell our power.

Ruth Bader Ginsburg lived and then she died. There will be a public viewing of her body, after which she will be buried. We will look at her life and honor her achievements, which are historic. We will honor her with words, but will we act? I ask, “What will we do next?” because I intend to keep engaged and continue to act. I answer my question with “I will make necessary trouble.”

When John Lewis died, many Americans mourned. Lewis was a central figure in the struggle not just for racial justice in America, but justice and freedom for all people everywhere. While we were saddened by his death, we understood that he was just one of many who have fought to make this country a fairer and more equal place. We studied his life and used it to inform our own actions. We noted his death and used it as fuel to fight.

On May 25, 2020, George Floyd was murdered by Minneapolis police officers. One police officer put Floyd to the ground, pressing his knee on Floyd’s neck. The other officers watched Floyd die, ignoring his pleas, deaf to his complaint that he could not breath. People on the street, watching what was happening, pleaded for the police to stop. One person captured video of the murder on his phone and shared it online.

Minneapolis-St. Paul erupted in protest. The police responded with violent suppression. Protesters were not thwarted, neither was the city. “Work-a-day” Minnesotans joined Black Lives Matter activists in the street. The protests quickly morphed from a reaction to one man’s murder to a deep critique of systemic problems of racism and policing. We also started hearing people chant, “Say her name!”

On March 13, 2020, Louisville police busted down the door of Breonna Taylor’s apartment, allegedly looking for a past acquaintance of Taylor’s. The police had a no-knock warrant, which meant that they could enter the Taylor’s apartment without giving any notice – No “Open up! It’s the police!” No “Come out with your hands up!”  No knock knock knock. It was breakdown-the-door and storm inside, where Taylor was sleeping with her boyfriend Kenneth Walker. Because the police failed to identify themselves, Walker fired off a bullet (from a gun he legally owned). The police opened fire, killing Taylor.

The Louisville PD tried to bury the murder and they were somewhat successful, at least as far as keeping the killing from the greater public. Activists, however, would not let Taylor’s murder die. When George Floyd was killed, those fighting police brutality made damn sure that not only we would know Breonna Taylor’s name, we would see her life in a chain of other lives that were ended prematurely by the police.

John Lewis died on July 7, 2020, a little more than a month after George Floyd’s murder. He saw the protests and supported them. When activists painted Black Lives Matter on the street in D.C., he visited the site and gave the mural and its message his blessing. And when he died exactly one month after his visit to Black Lives Matter Plaza, the public mourned Lewis’ death. We memorialized his life and his fight for justice, but, most important, we looked at Lewis’s live work at an example that we should follow and a call to action.

The Black Lives Matter protests that erupted with George Floyd’s death had already grown before John Lewis died. We saw protests in nearly every major city across the country. We started seeing cities reevaluate their policing policy. Still, there was no knowing if what we were seeing from elected officials was simply talk or something bigger. We did not know if the protests would fade or continue. John Lewis’s death or rather the deep reflection of his life gave new energy to the protests, which got bigger and spread further, into suburbs and small towns. As protests continued, police overreaction and the murder of more Black and Brown people by law enforcement fueled our dissent.

We honored John Lewis’s death by using his life as an example of what we must do. We did not treat Lewis as the agent of change, but one of many people who work and have worked to make things better. We refused to put Lewis on the white horse and instead took our place besides his spirit and marched. We did what John Lewis did when his friend Martin Luther King was murdered; we refused to fall into despair. We fought back.

Ruth Bader Ginsburg is dead. She was a great legal mind and an extremely important person. Her work made a profound difference for Americans, especially for but not limited to women. Her loss at this time is felt deeply by those who want a better America.  However, we sully her life by falling into despair and by asking “What do we do now?” That is not what she would want us to say. It is not what John Lewis would want us to say. Ginsburg would want us to honor her death with action. She would implore us not to give up, but to fight back. She would urge us to respond to her death as we did to John Lewis. She would demand that we heed the words of Joe Hill, the IWW labor leader murdered by the state long ago: Don’t mourn, organize.