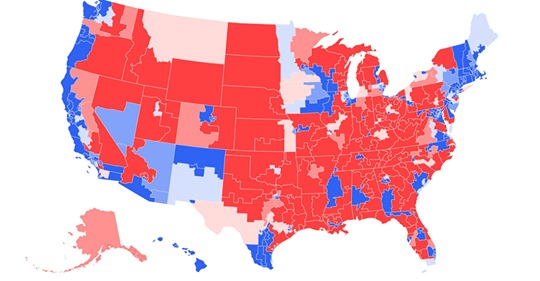 CNN’s Chris Cillizza reports on recent generic ballot polls for Congress (generics are when no candidate is mentioned) which show that the voting public prefers a Democratic controlled Congress 51% to 40% – an 11-point gap. He notes that in January that gap was 6 points.

As someone who studies and writes on polls, Cillizza’s reporting is solid. The preference for a Dem Congress has been consistent for a time, but within a margin of error. It is fairly typical for voters to want the opposition in charge of Congress when the other party has the presidency. That and Trump has never been popular.

What is unique is that the gap widened, but given that the GOP is tied to Trump and Trump is Trump, that is not surprising. Trump’s COVID non-response exposed how inept he is (remarkably, something that had yet to sink in). The Open Murcica/We Want Curly Fries protests didn’t help him. We will see how wide the gap becomes with fresh polling after the George Floyd/police protests (Cillizza,is working off of week old polls).

The really interesting and encouraging (and frightening thing for GOP) are the spots in that map that are blue and pink: Arizona, Texas, the most populated part of Nevada, Montana, Wisconsin, Michigan, all of Maine. Texas and Arizona (as well as a light pink Montana) should really scare the hell out of Republicans, but also are the dots throughout the South, the baby blue in Washington’s Yakima Valley, the baby blue in California’s Central Valley, and the near total blue of So. Cal. That blue splash in Wyoming is around Jackson Hole, so I wouldn’t read much into it.

Important thing to note that polls are not predictions but snapshots of a time and place. Well done polls are reliable for that kind of information, and useful for political operatives and candidates to strategize off of. For you and me, they are a good check in. They are a good grounding mechanism. Read as a snap shot, they keep us from getting too high or too low, too hyped up or too complacent. An 11-point gap is great, especially if it grows or stays come September, and we should be buoyed by it. Now turn that into action.

For three years, I have been imploring readers to engage in politics, not through social media, but in the real world. I know that COVID makes person to person in person contact difficult, but there’s more than that. And because of COVID it is vital that we really, really get involved if we want to make this election a solid defeat for the GOP. Street protests are great, but they are not votes. We do not need to divert energy from protests, but to make sure that the feet on the street vote and then go back to the street to protest. We desperately need the energy and activism on the streets, what we’ve seen over the past two weeks, but we also need people inside to respond to our demands and make them policy and law. One cannot work without the other. Inside/outside.

So, how to? Contact a local, state-wide or congressional campaign, especially one in any pink, pinkish or baby blow area on that map. Those campaigns should be able to funnel your energy in useful ways. Hardly any of the work you do will be glamorous, but it will be work that needs to be done, political chores. It is stuff that needs to be done. It doesn’t need to take over your life. A good campaign knows that you have a limited amount of time and energy to give and they will work with that (so be frank about what and how much you can do).

Now, I am sure that there are some of you out there whose heads are spinning with What Ifs and objections and whatever misgivings about Biden and the Dems and the DNC and whatever or fear about what Trump will or will not do. Stop. Don’t bring it here. I am talking bread & butter politics, about getting people in Congress and state and local offices, and building excitement from the ground up. Anyone who you reach, who you get to vote for a good candidate for your city council or Congressional district will be a vote against Trump or whatever Republican is running for Senate. Too often we worry about how a presidential candidate will impact down-ticket races, well, let’s flip that and make the down-ticket races influence what happens at top.