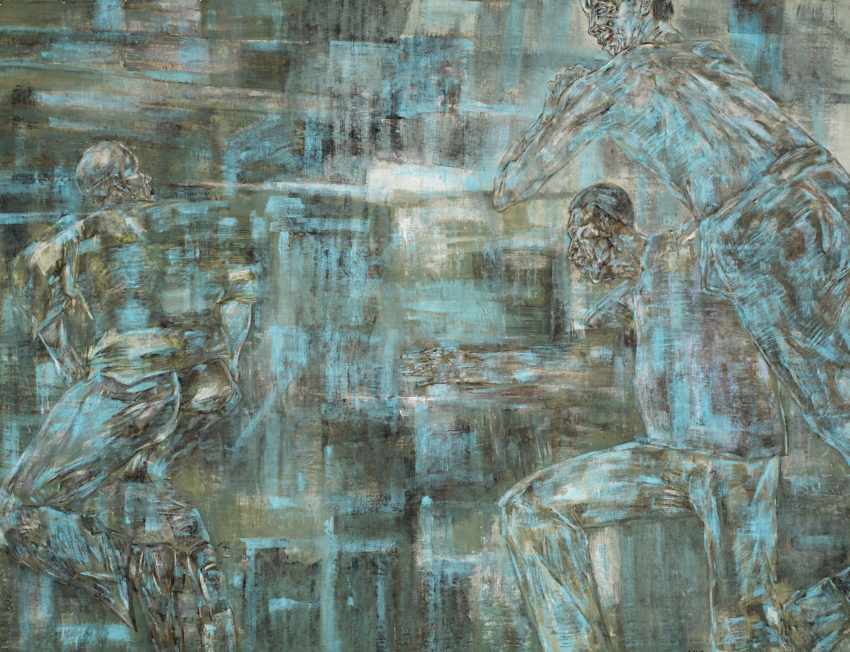 Have you ever been in a riot? Never? I have; several. The first one was at the Democratic National Convention in 1984. We went down from Sacramento to San Francisco to see the Dead Kennedys. Mayor Dianne Feinstein had the police create “protest pens,” areas tucked away from the convention, which allowed police to keep crowds contained. Once in a “protest pen,” the only way out was to squeeze through police lines, which meant confrontation with the police, which meant tension and violence.

We parked in Berkeley and took BART in; got off at Embarcadero station and walked to a big lot at 3rd and Mission, a designation protest pen and site of the last “Rock Against Reagan” concert (the first was at Dolores Park with the Dead Kennedys…and Whoopi Goldberg!). The walk to the pen was surreal. Police on motorcycles lined the streets. Police on horses were stationed at corners. Police stood on side streets guarding empty school buses, which would later be used to jail protesters. Police helicopters whirled above. The police were the pen’s ceiling and walls (and, judging by the many cops at BART stations, the floor). We were contained by the police.

Inside the container were protesters and punk rockers and loud energetic music. The pressure in that protest pen was incredibly high, but it never really got out of control. Towards the end of the concert, a group of a thousand, two thousand people broke away and marched to the Hall of Justice, demanding that protesters who had previous been arrested be released with all charges be dropped.

The police tried to create a moving pen. They sealed off intersections to our left and right, effectively controlling our flanks, but they were slow to get out in front of us and failed to pinch us off from the concert crowd. Again, the containment pushed the pressure high. Our pressure release was yelling at the police. Still, the march was peaceful…for a few blocks.

Suddenly, police on horseback charged. Batons swinging, police smacked every head they could. Motorcycle police used their bikes as weapons. Instead of corralling people, they rammed into dense pockets of humans. Sirens blared, loud speakers wailed, engines revved, and there was angry shouting and painful screaming. The police grabbed people and threw them on the ground or against fences and walls. People were tripped and tackled. Knees ground into backs and necks. And after five minutes of this, everything exploded.

The protesters who hadn’t yet been beaten down used whatever was near as shields. They tipped over garbage cans and rolled them towards charging police. The police retreated and then charged again and again, always swinging their batons or using their horses and motorcycles as weapons. Try to escape, flee down a side street, and…everything was sealed off. We were trapped in a riot not of our making. Then glass started to shatter.

I was lucky. Halfway through the melee, the pack of people I found myself with discovered a small opening on a side street. We still had to face a police line, but this one had a hole in it and we headed for that hole, twenty of us, crammed together, a flesh bludgeon. Twack, twack, thwack, batons slapped our sides. I took one right below the ribs, but kept going, we all kept going, and then we were free, kind of…

As soon as we broke through the police line, we scattered; but police on horseback were in pursuit. Those who were from or knew San Francisco quickly exploited the city and found places to disappear. Visitors like me just kept running and running until we passed over some invisible line which the police would not cross.

The opening lines to the Dead Kennedy’s song “Riot” are

Riot, the unbeatable high
Adrenaline shoots your nerves to the sky ﻿

Biafra warns that the violence unleashed by the riot will meet a wall,

But, here’s the thing with political riots: Political riots are rarely planned. Though the timing tends to be spontaneous, the neglect, abuse and mistrust which prime a riot are borne over months, years, and decades. For the punkers and protesters in San Francisco, we were pissed off about Ronald Reagan and his policy in Latin America and on the Cold War, his failure to act on AIDS and homelessness, his demonization of “minorities” and attack on women’s rights, as well as the Democrats softness and drift to the right.

San Franciscans were angry at Dianne Feinstein and her rollback of progressive policies championed by the assassinated mayor George Moscone and supervisor Harvey Milk, as well as her embrace of police power. Punk rockers were pissed at everything, but particularly the police, who constantly harassed us for wearing “strange clothing,” having “wild hairstyles,” playing loud music, and wanting to be left alone. Instead, the police raided our shows, often with extreme violence. Teachers and principals threw us out of school. Jocks and aggies attacked us. And parents shipped us off to “troubled children” facilities in Utah for “re-education.” We had plenty to be pissed about.

I think America must see that riots do not develop out of thin air. Certain conditions continue to exist in our society which must be condemned as vigorously as we condemn riots. But in the final analysis, a riot is the language of the unheard.

What happens to a dream deferred?

Or does it explode?

Riots are not just “the language of the unheard.” Riots are, as Hughes says, an explosion. Riots are action. Riots are violence. Once that violence is triggered, the riot will find its own expression. Back to Biafra,

So you turn right around
And play right into their hands
And set your own neighborhood
﻿Burning to the ground instead.

Back to King’s “The Other America” speech,

The rich and the poor, the white and the black, male and female: Who has power and who doesn’t, and how does that power express itself?  In a violent society, power is expressed through violence. Whoever has a monopoly on power has the monopoly on violence. Biafra,

It’s all over but not quite
The pigs have just begun to fight﻿
They club your heads, kick your teeth﻿
Police can riot all that they please﻿

Every riot I have been in was a police riot. Whether the event was a punk show or a protest, punks and protesters might have been pissed off and ready to rumble, but we didn’t gather with that intent. We gathered to watch and play music, to slam dance, to stage dive, to be weird with our weird friends. We assembled to protest injustice, to speak our minds, to organize, to try to change the world, to do our duty as citizens in a democratic country.

The riot happened when the police determined that what we were doing was not what the police wanted us to do. Didn’t matter how peaceful or orderly we were, that we had permits and permission to gather, or that we had the constitutional right to do what we were doing, when the police said it was over, it was over, no explanation, no opportunity to appeal. In fact, to question “Why,” ask for an explanation, or defend our rights was an invitation to a beat down.

Actually, we were lucky if we had a chance to question why we had to disperse. Too often, there was either no order to disperse or the order was given by a cop yelling “DISPERSE!” in a room of amplified noise. The violence came without warning. We had a choice: Run or fight. Most of the time, we ran or we ran and fought, not because we wanted to fight, but because not to fight back would be surrender. We’d be beaten and arrested. Sooooo, did the riot start with the first punch or the counterpunch, or before the first punch, when those with power pushed the powerless?

When we talk about political riots, we become obsessed with the spark. MLK and Langston Hughes tell us not to focus on the spark, but to look at the fuel. That is sound advice, but we need to go deeper than the “plight of the Negro poor,” “the failed…promises of freedom and justice,” or a Black man murdered by a police officer while other officers watched. We need to dig deeper than decades of unrestrained police violence and a racist president who encourages it.

Power is the primary fuel of a riot – who has it, who doesn’t, who makes the rules, who is expected to obey. Forget the politics or cultural trappings of the people protesting or gathering, political riots happen when the powerful chose to use violence to contain people who are engaging in politics, including protest. Thus, riots are an expression of power by the powerful and the reaction by the people to that expression of power.

The riots in Minneapolis did not start on May 28th, when the 3rd precinct police station burned, or when protesters torched building and shattered windows. The Minneapolis riots started when the police responded to peaceful protests with violence, when the powerful arrested, beat, and fired tear gas at the powerless.

When the violence came down, the protesters had a choice: Surrender, play passive, run, fight back or run and fight. How one chooses is reflective of how one feels about power. Surrender, be passive, or run and one cedes power to the powerful, a tacit acceptance of the imbalance of power.  To fight back or to run and fight is a rejection of the power imbalance. It is the taking back of one’s power. It is asserting freedom. Fighting back is a rejection of “[white society’s] tranquility and the status quo.”

Once people have chosen freedom over submission, the riot becomes trivial, another spectacle. To stay in riot mode is to live in a trap. What happened is not as important as what happens next. Are the Minneapolis riots a single expression or are they a step toward something better, a marker on the path of “justice, equality and humanity?” We know what is wrong, we know what needs to be done, now we must decide where to go from here.

1 thought on “There Are Riots Going On”