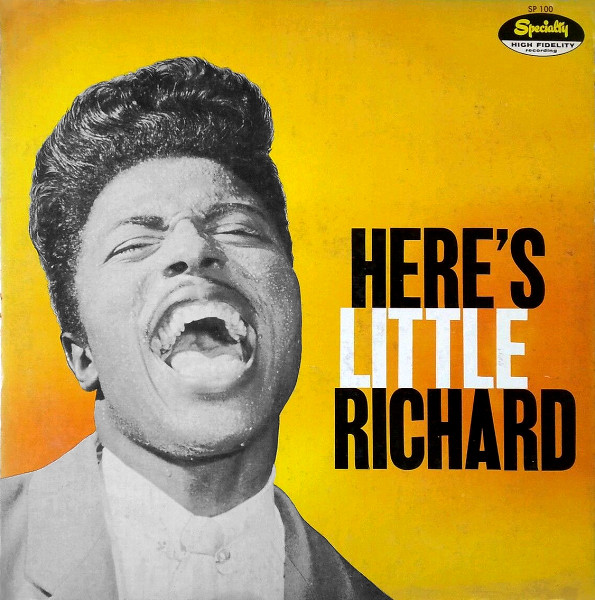 When I was a kid, my mom plopped a box of 45s in front of me and said, “Have at ‘em.” From then on, while other kids were out playing, I’d be in my room with that box, playing 45 after 45 on a junky record player, making stacks of the bad ones, the good ones, and the great ones. The bad ones were by singers like Connie Francis, Anita Brewer, and Fabian. The good ones included hits by Ricky Nelson, Dee Dee Sharp, and The Shirelles. The great ones I remember by heart:

Peggy Lee’s Is That All There Is?

and the one that got the most spins,

The Little Richard classic wasn’t the runaway favorite. Like any truly great great song, it had tough competition, in this case, Jerry Lee Lewis’ Great Balls of Fire. The thing that tied together two of the best songs rock & roll ever produced was the energy. Little Richard and Jerry Lee Lewis were screaming piano players, who played their instrument as if it was a drum. That and the inherent high energy of the songs made them stand out from other classics like Elvis’ That’s All Right Mama or Carl Perkins’ Blue Suede Shoes, both excellent songs, but absent the verve of Tutti Fruitti and Great Balls of Fire.

In the conformist America of the 1950s, the energy music of Little Richard and Jerry Lee Lewis was a threat. This glorious mutant working-class noise born of Black sharecroppers and white hillbillies, supercharged by sex and alcohol, overwhelmed the petticoat and penny loafer crowd and embarrassed the poseurs in their pony dresses. The music challenged the perception of what it meant to be American.

While the establishment tried hard to pimp America as white, conservative, suburban, and satisfied, Tutti Fruitti and Great Balls… said something different. The songs said, “What you offer us is not enough. We need more” and millions agreed. The Establishment wanted their little girls to bring home Andy Williams or Pat Boone but their daughters wanted Little Richard and Jerry Lee – brash, loud, wild men with outrageous hair full of grease, a deadly swivel in their hips, and songs that screamed from the soul. It didn’t matter how hard the Establishment fought or tried to coopt rock & roll, nothing could contain that energy.

Have you ever been to a gospel mass in a Black church? There really is nothing like it. Here’s my experience: As I enter the church, a deacon greets me as if I am family. No matter that I am one of a few white people, if not the sole white person, to walk through that door, and this is my first visit, once I pass through the threshold, I am of the church.

I take a seat in pew or folding chair and nervously wait. The nerves come from both anticipation and feeling out of place. It’s not just my skin color, but that I am in a house of worship, a place I never dug as a kid and studiously avoid as an adult. I tell myself that I am not there for reasons of spirituality, but for the secular, the music. I am fooling myself.

No gospel mass that I’ve attended had a set start and stop. All the Catholic masses I was dragged to, even the ones at a hippie off-campus church, started on or very close to schedule. A few nuns and a monk or two took the stage, the parish priest slid behind the alter, and the church fell into silence. There would be an introduction and then some rites, the Liturgy of the Word, Liturgy of the Eucharist, and a closing. Music would separate each act, either sung by a choir or some hippie nun with an acoustic guitar. The priest would say his last words and there would be a brief announcement about a study group, spaghetti feed, or fun run, and, as the layperson rambled on, the parishioners rose and mingled.

Every gospel mass I’ve been to starts with mingling, lots of it and everyone participates. Introvert me always finds a place at the back or edge of the church. I want everyone to ignore me or know that I am just there to observe. I am not a church goer but a “musical anthropologist.” This conceit lasts until a lady in a fancy hat strides up to me and says, “Look at you!”, grabs my hand and squeezes it, and has me telling her everything about me. “Oh sugar, it will be alright, you’ll see.”

While we mingle, the musicians slide into place. Tuning drifts into a slow, quiet, steady vamp. It probably goes on for five minutes before I notice. Everyone is still mingling as the choir gathers, and not just mingling with each other but the musicians and the singers. The reverend is moving from person to person, shaking hands. If you are a long-timer, he asks about grandma and the kids or the raise that you wanted. If you are a rookie, he asks your name, greets you by name, and asks were you are from.

I never see how the preacher gets to the podium or when, but I hear it. There’s a shift in the band, the vamp has turned to song and the preacher steps to the mic. Sometimes he starts with a song, or a few words and then song, or straight into a sermon that rambles, digresses and builds to musical excitation. Unlike the thousands of Catholic church services that I’ve been to the gospel mass has no set structure. It goes where the music and the spirit takes it.

Years ago, my friend Kirk Newcross and I stumbled into The First Gospel Tabernacle Church of Memphis, Tennessee, spiritual home of the Rev. Al Green. We lucked into the mass falling on the Reverend’s 50th birthday and, man, did he celebrate. Though the mass was scheduled to end at noon, the Rev. Green blew through every marker with “I know we are supposed to stop right now, but I’m having too much fun, there’s too much spirit to stop” and so he kept going and we kept going and going and going until the song turned to mingling and we mingled our way out the door. We had no sense of time other than we had arrived at 10 a.m. We got into my pick-up truck, looked at a clock. It was 3 p.m. and we were ready for five more hours of spirit.

That First Gospel Tabernacle mass was the moment that I realized that though I was a confirmed militant agnostic (I will fight over my right to say “Hell, if I know!”) there was no escaping the spirit. I also learned that the ecstasy that I felt at gospel masses was one that I often felt with high energy rock & roll.

There is a moment in Tutti Fruitti that says everything you need to know about Little Richard as preacher, as rock & roller, as a sexual being, and as a rebel. You know what moment that I am talking about because it is one that thrills every fan of rock & roll. It comes 39 seconds into the song. Right after Little Richard sings a “Tutti Fruitti,” he throws in a “A wooooo!” and it kills! While you might not get the chills when you heard the “A wooooo!”, almost everyone gets a lift when it comes. Most of you, throw in a “A woooooo!” yourself or work hard to suppress it.

That “A wooooo!” is a natural punctuation – an exclamation point – that has no place in a tight-ass world. You don’t hear Frank Sinatra or Dorris Day break structure with a yelp, a scream, or even a coo.  Fake rockers like Neil Sedaka and Paul Anka manufacture their “A wooooo!” and study the spontaneous moments of a Little Richard to figure out where they are placed. In 2020, Little Richard’s “A wooooo!” doesn’t seem like much but, at the time, that “A wooooo!” as both a war cry and a bag set ablaze on the front porch of the squares. That “A wooooo!” was liberation.

The first time I heard that “A wooooo!” I was around five years-old. I picked up the needle and played that “A wooooo!” over and over, laughing ecstatically at every pass and eventually A-wooooo-ing along. My mom would plop by kid brother Tim next to me and he’d “A-wooooo!” along with me…and we’d laugh and laugh and laugh. And then we’d dance as if we were in a church, for at that moment we were one with the spirit, with each other and with Little Richard.