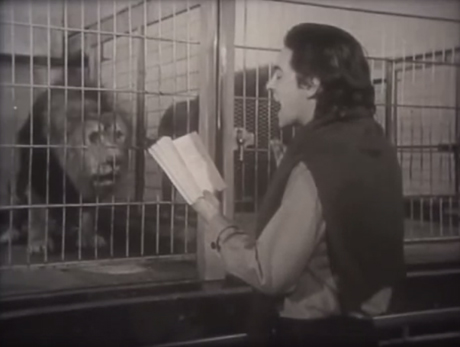 The poet Michael McClure died this week, due to complications from a stroke he suffered a couple years’ back. McClure was one of the early participants in San Francisco’s Beat scene. He not only wrote poetry, but organized some of the movement’s key events. His continued presence in the Bay Area’s literary scene was a bridge between the Beats and the Hippies.

McClure’s most noted work was the 1965 play, The Beard, a riff on human relationships which ends with the main characters – Jean Harlow and Billy the Kid engaging in sex on-stage. After a few performances, the San Francisco Police Department raided a production and arrested the actors. The Beard went from an exploration of McClure’s contention that humans are “bags of meat” to a statement on free speech.

The book Meat Science Essays – where “bags of meat” comes from – was my first exposure to McClure. The Sacramento poet B.L. Kennedy handed me a copy of the book, digging at the old Beers Books downtown. A week later B.L. turned me onto a copy of the Ghost Tantras. Both books were a huge influence on my writing and thought. As shitty young poet, I was obsessed with the Ghost Tantras “animal language” (McClure read the poems to lions at the zoo!)

Following McClure and Jerome Rothenberg’s dada-influenced poems and studies into “primitive poetry,” I made my own not-so-good sound-based poems. Encouraged by B.L., I sent some of these poems to Michael McClure, who was kind enough to write me back with mild criticism and much encouragement. Over the next year, I wrote him and he wrote me back. When he came to Sacramento for a reading, I was hugely excited but too embarrassed to tell him that I was his letter-writing fan when I got him to sign my copy of Ghost Tantras.  My “correspondence” with McClure ended there.

While I did not know Michael McClure personally, in my minimal interaction with him he was kind and generous, willing to spend a little time on a young poet of questionable talent just because the kid sent him a letter. For that and the decades of interesting work the man did, thank you, Michael McClure.