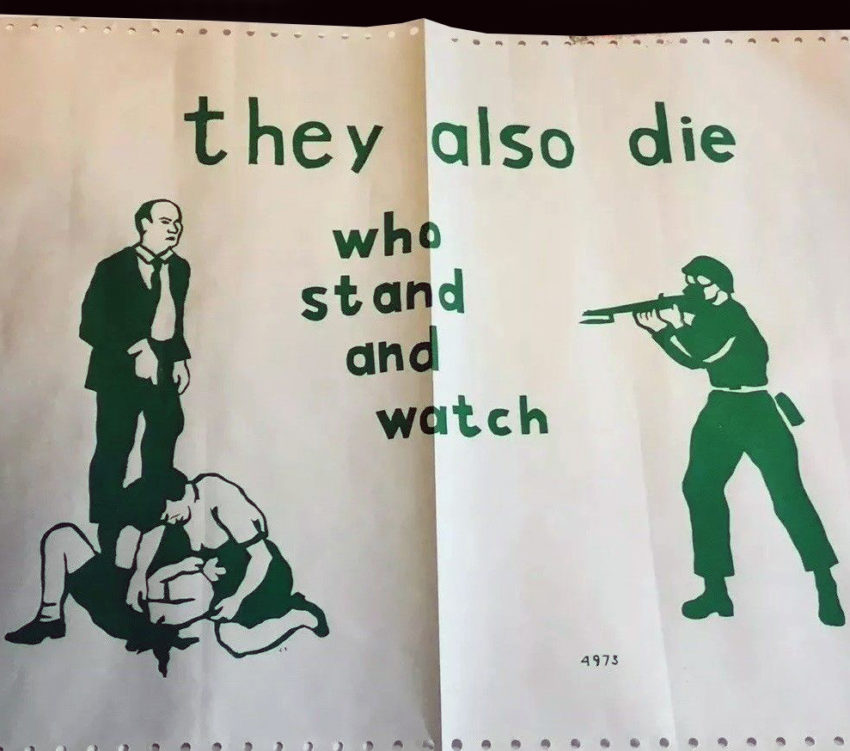 It has been 50 years since the Kent State Massacre. On May 4, 1970, twenty-eight National Guardsmen used up all of 13 seconds to file 67 rounds into a crowd of students, killing 4 and injuring 9, one of whom became paralyzed for life. Why did the students get mowed down? Well, some were protesting the illegal April 30th invasion of Cambodia, others were bystanders. May 4 was the fourth day of protests and Ohio’s leaders were sick of it.

On the Sunday before the massacre Ohio Governor Jim Rhodes pretty much ordered the massacre when he told the press:

We’ve seen here at the city of Kent especially, probably the most vicious form of campus-oriented violence yet perpetrated by dissident groups… they make definite plans of burning, destroying, and throwing rocks at police and at the National Guard and the Highway Patrol. …this is when we’re going to use every part of the law enforcement agency of Ohio to drive them out of Kent. We are going to eradicate the problem. We’re not going to treat the symptoms. …and these people just move from one campus to the other and terrorize the community. They’re worse than the brown shirts and the communist element and also the night riders and the vigilantes. They’re the worst type of people that we harbor in America. Now I want to say this. They are not going to take over [the] campus. I think that we’re up against the strongest, well-trained, militant, revolutionary group that has ever assembled in America.

And with that the execution order was signed. Allison Krause, Jeffrey Miller, Sandra Scheuer and William Knox Schroeder were dead. Krause and Miller were student protesters. Scheuer and Knox were walking to class.

One of the students protesting with Krause and Miller was Jerry Casale, who would later create DEVO. In an interview with the Vermont Review, Calale remembers:

Jeffrey Miller and Allison Krause, were my friends. We were all running our asses off from these motherfuckers. It was total, utter bullshit. Live ammunition and gasmasks—none of us knew, none of us could have imagined … They shot into a crowd that was running away from them!I stopped being a hippie and I started to develop the idea of devolution. I got real, real pissed off.

In other interviews and writing, Casale marks the Kent State Massacre as the day the United States slid into fascism. The massacre showed that America does indeed eat its young. If there was any doubt that America’s elite valued the prerogatives of power over life and dissent, the aftermath of the massacre – wherein the state went from denial to cover-up to admission and dismissal, no one being held accountable for the massacre, even when audio evidence surfaced that suggested that the massacre was not random or a mistake but ordered.

Every anniversary of the massacre, some journalist finds Jerry Casale and does an interview. Usually these repeat retrospectives are news fodder, but Casale always has something interesting to say. Today Rolling Stone runs an interview with him. Do check it out and know that Kent State still lives on. We haven’t escaped the American elite’s obsession of authoritarianism and violence or the thousands of citizens that support acts like the massacre. Know that Kent State is one marker on the road to refugee children being locked in cages and armed right-wingers threatening public officials with the president’s support.