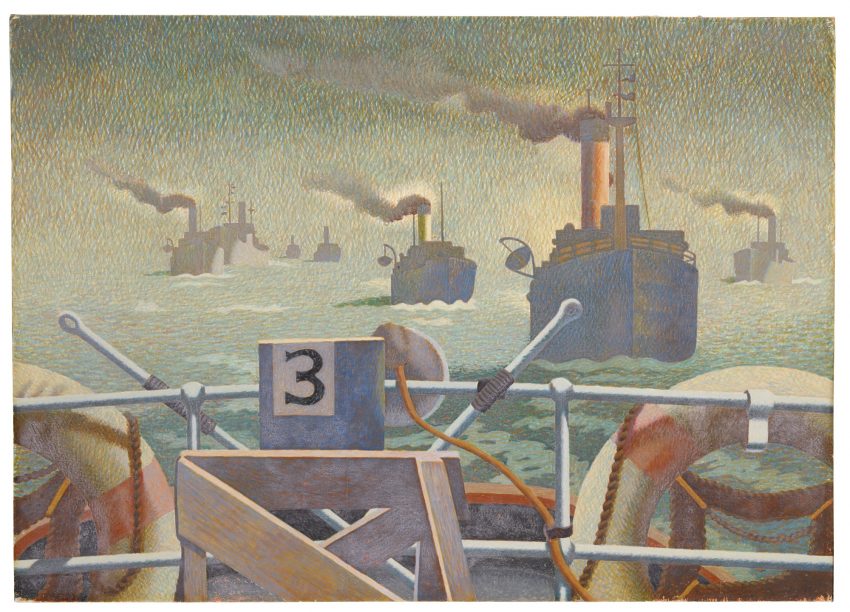 The stranding of the Ever Given super-freighter in the Suez Canal is far more than a tale of a boat run aground. If you’ve followed the story, you know that there was a backup of freight – 10% of the world’s shipping – and that some freighters doubled-back through the Mediterranean to make the trip past the Horn of Africa, a dangerous route because the seas under the Horn are pretty gnarly and PIRATES!

We didn’t always have ships so big that they could get stuck in canals. We can thank globalization for the super-freighter. As the Guardian tells it, high oil prices in the early ’00s – thanks in part to the Afghan/Iraq Wars – made shipping companies desperate for a way to ship more goods cheaper. The answer, they thought, was bigger freighters, vessels large enough to move three regular freighters worth of merch.

The Guardian doesn’t ramble on about the merch, so I will. These super-freighters are loaded up in Asian ports with cheap shit made in China and other countries where wages are low. The freighters head to Europe and the US, where the cheap stuff is offloaded and American/Euro made lux goods, ag products, cars, and some electronics are taken on and shipped back to China and its neighbors. There are similar trade routes between the US, Canada, and Europe and other parts of the “developing world.”

With our merch, the US also sends – indirectly – millions of good-paying, formerly unionized manufacturing jobs overseas. These jobs have been “replaced” with low wage jobs in the service industry. How many of these low wage American jobs are we talking about? Oh about 40% of the jobs in this country (pre-pandemic). No big deal if the “new” jobs pay as well as the sent overseas, but they don’t. Most of the “new” service jobs pay federal or state minimum wage, wages so shitty that many people who work these jobs are forced to work two or three jobs to get by. Others work full-time jobs and get food stamps and federal assistance to eat and keep a roof over their heads.

When we talk about income inequality, we tend to think of it in terms of stuff and income: How much stuff does the 1% own compared to what we possess? How does the income of the 1% stack up against ours? We miss another important comparison: The jobs available to the 1% vs. the jobs open to the rest of us or the small number of jobs that pay six and seven figures vs. the many jobs that pay starvation wage or paycheck-to-paycheck salary. Figure in gender and race, and the income gap between well-paying jobs and the rest grows, and so does the pay gap within both segments of jobs.

A lot of discussions about global trade and cheap stuff focus on demand. We are told that it is consumer demand that fuels the market for cheapness. We get shamed for our “addiction” to cheap shit. Shopping at Walmart, 99 Cent Store, Ikea, or Old Navy is more than a choice, it is what we love to do. “We are a land of bargain hunters!” they say, and, depending on the point of view, we benefit or suffer because of it. But, c’mon, did we ever really have a choice?

Related story: In the 1980s, when the compact disc was invented, cassette and vinyl were the dominant formats. Consumers were fine with that. The major labels were not. The majors were having a hard time making a buck, mostly due to their own bad business practices. They’d sink tons of money into superstar or “potential” superstar acts, hoping that their bets would pay off…and often they did. But the stakes were so high that when the gamble didn’t pay off – see the Sgt Peppers’ movie soundtrack, the campaign to make Charlie Sexton a star, or Casablanca Records’ history – a few stiffs could push a label into bankruptcy.

Rather than blame themselves and figure out a better way to do business, the majors pulled a huge con on consumers. They moved to make compact discs the dominant format.

The majors forced CDs onto record stores, while engaging in a campaign of lies. CDs were pimped as the ultimate in sound quality. They were not (and not for the reasons the “vinyls sound the best” crowd thinks). TV ads showed CDs being put into a dish-washing machine and plopped into a CD player, as if they were indestructible, when, in real life, running a CD through the wash & dry will destroy it. They not only sold the CDs as better than the rest, but, following the audio equipment industry, they marketed the CD as a status symbol.

Consumers balked. The initial CDs were crap. The material used as shitty, especially the glue, which caused something called CD Rot. They skipped. And, because digital sampling rates had yet to be perfected, the sound was horrible. Cymbals sounded like static, horns sounded like farts. The discs were easily damaged.

Not to be deterred, the majors started by phasing out vinyl and cassette. No matter that music lovers were fine with the formats, literally overnight, the majors informed record store that vinyl was gone, tapes were on their way out. The compact disc was now the dominant format.

The majors used their dominance of the music market to fix the price of CDs, a crime that they eventually got busted for. They also continued their “sound quality” propaganda campaign, this time as a justification for phasing out vinyl and cassettes, as well as the high price for CDs. Now that they consumer felt that they had no choice but to buy CDs, they started repeating the sound quality line.

As much as American music lovers like to talk sound quality, fact is, most people don’t know a whole hell of a lot about sound. I am a hardcore record collector, have produced albums, run record labels, recorded bands, and played music. I know the difference between shitty manufacturing quality and good quality or shitty audio equipment and good audio, but I couldn’t tell you the difference between a good later-generation CD and a quality record. Knowing that, I’d be a fool to start buying CDs of music I already have on record – which is why I own only 100 CDs and tens of thousands of records.

But, Joe and Jane Music Buyer aren’t me. They don’t know sound or the music industry. So when the major labels kept telling them that a $20 CD of Sticky Fingers is going to sound oh so much better than the vinyl copy that they bought in 1976 for $4.98, they caved and started shelling out the $20 for CDs of music they had on record. They’d sell the vinyl to me for $1 (and now that their CDs are worth nothing and “vinyl is back” they buy a record for $25 – $40). And this is what millions of people did. They rebought their record collections.

As people got a bit pissed at the major for $20 CDs and technology advanced, the labels cut the retail price of CDs and started to include extra tracks. The price drop was not big deal to the majors: CDs cost them about a buck to make. When the majors forced the new format, they renegotiated record contracts with their artists, so that artists were getting less per unit than they were with vinyl. And shipping costs of CDs were a fraction of vinyl. The majors were making more money than ever…all on a product that no one really wanted in the first place (which is one of the reasons why the industry came crashing down once digital evolved to the point where the consumer had some control over it).

I tell you the story of the CD because it is the story of cheap shit. No American asked for cheap shit. None of us woke up and said, “I want my music to sound sterile,” “I wish I could buy badly manufactured clothes made for slave wages in China,” “Where is my plastic?” or “Boy, wouldn’t a Walmart look great on that wetland?” We didn’t ask for good paying jobs to be shipped overseas or unions to be destroyed. This was all forced on us.

We buy this shit and keep the system going, because, in many cases, we have no choice. I would love not to buy my clothes at Old Navy or furniture at Ikea – and I do try to buy used when I can – but I do not make enough to buy lux goods. The guy driving the Uber buys shit shoes at $40 a pair because he can’t afford anything else, and in four months he buys another pair because the shit shoes fell apart. He didn’t choose that for himself.

No one wants cheap stuff. No one wants to eat cheap food. We do so because we have very few choices. That is the reality of 21st Century Capitalism: Lots of choice for the wealthy, few or no choice for the rest of us. And, the hell of it is, none of us asked for this. It was forced on us and we were told not only to be grateful but what was happening was freedom.

And that is why a goddamn boat got stuck in a fucking canal.